It's been several years since I got my first binoculars and, with the help of some fellow birders, I ended up involved in the birding world. That happened in the late nineties, and from then I've never stopped birding, especially in Osona (my county), Empordà and Ebro Delta. Due to a little obsession on the subject I've participated in several bird studies, especially those run by  ICO and GNO, but also starting personal projects such as, for instance, the old website to Osona Birds.

The painting thing started as a kid. I never stopped drawing and, indeed, it is from 11 or 12 onwards when I've been drawing the most. My interest in birds and nature became the main -and only- theme in my drawing, and soon I was filling notebooks with field sketches. In the meantime I had my first steps as a nature illustrator, begining with the painting competition Albert Ramon i Estarriol and a few rather simple collaborations. Lately I've been working non-stop as an illustrator in tens of projects; most notably, the Catalan Winter Bird Atlas 2006-2009.

Nowadays I am working both as an illustrator and a biologist at the same time, taking part in unexpected experiences: from oceanographic campaings for SEO/BirdLife to an expedition to the mountains of Montenegro for the forthcoming European Breeding Bird Atlas 2. I hope this job won't stop bringing exciting new oportunities! Right now you'll find me working at the Catalan Institute of Ornithology (ICO).

Sometimes it is difficult, but I'm always trying to keep some time for field ornithology, with special focus on migrating birds. Moreover, lately I've found myself interested on other wildlife. I'm starting with butterflies and orchids, still as a beginner, and let's see what may come! 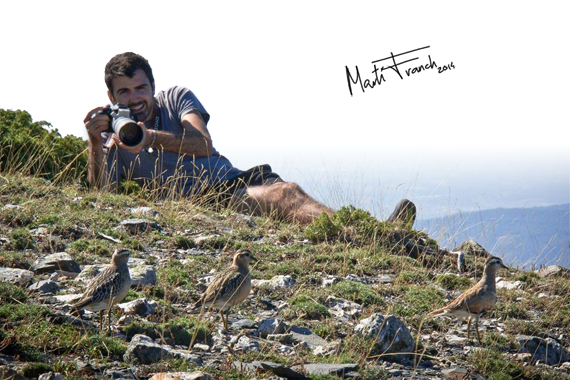 a aquest blog / in this blog